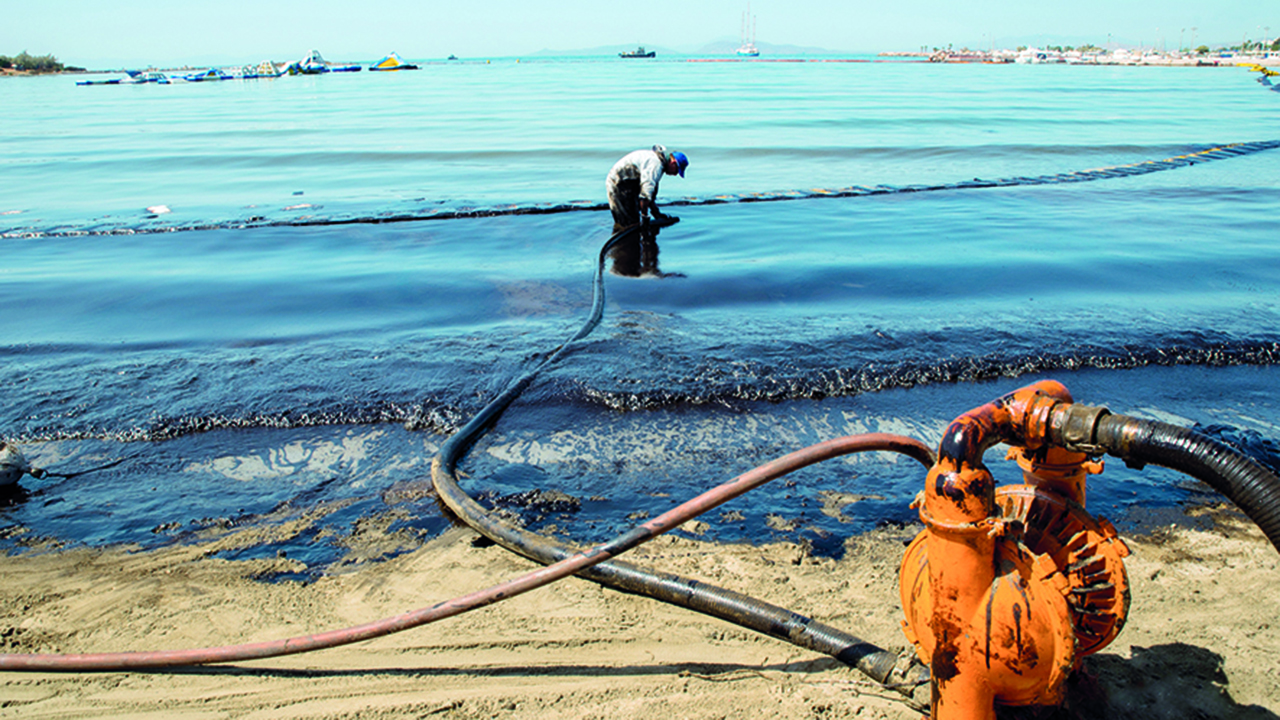 The shores and coasts of the eastern region of the United Arab Emirates were exposed to environmental pollution more than once during the first half of this year due to the oil spill.

That was as a result of the leakage of quantities of oil from ships into the water, leaving behind great environmental losses. Therefore, the repetition of this type of environmental crimes confirms that the sanctions imposed Included in the environmental laws are insufficient, or lack of deterrence and the solution is to tighten penalties to prevent an oil spill from occurring

There is also the need to enact laws that prevent ships from continuing to commit this type of abuse, which causes the fishing movement to stop and increases the prices of fish in the markets.

UAE federal law prohibits the deliberate disposal of pollutants or wastes dumped from ships or aircraft, or any other means in the marine environment, and violators are punished with imprisonment for a period of no less than six months and not exceeding a year, and a fine of not less than two thousand dirhams and not more than 10 thousand A dirham, or one of the two penalties

UAE federal law prohibits the deliberate disposal of pollutants or waste dumped from ships or aircraft or any other means in the marine environment, and violators are punished by imprisonment for a period of no less than six months and not exceeding a year, and a fine of not less than two thousand dirhams and not more than 10 thousand Dirhams, or one of the two penalties, and for this reason, this law needs amendments to ensure the curbing of violations harmful to the environment

The amendments must affect all illegal activity or unhealthy use that leads to pollution of the seawater, including dumping waste and trash in it, and not stop at the responsibility of the ship’s captain alone. The penalties must include every violation that results in environmental pollution, and double whether the offender is a legal person, such as institutions, companies, and ships, or an ordinary person such as beachgoers.

And here it should be noted that the United Arab Emirates is a member of the International Convention for the Prevention of Pollution from Ships of 1973 (MARPOL) and is carrying out its obligations stipulated in Article 1 in terms of the application of the provisions of the convention as well as the investigation of marine accidents that cause pollution according to Article 12 of the treaty.

Head of the Environment and Protected Areas Authority in Sharjah, here Saif Al Suwaidi said: The oil spills that affected the coasts of the Eastern Region during the last period had negative effects on the environment and the various living marine organisms, which means that making efforts to address them is a very important issue, which is what The body does in such cases with its partners.

Al-Suwaidi also confirmed the fine of ships and vessels causing this type of accidents, and raising awareness levels for ship crews of the extent of the damage caused by the oil spill in the seas and oceans.

The oil slick results from the release of petroleum hydrocarbon liquids into the sea, which means that it is a form of environmental pollution, and it may consist of a variety of materials (such as crude oil, refined oil products, gasoline and diesel), which requires immediate intervention by the competent authorities and bodies to get rid of them. And cleaning up the place and the environment in general

The director of Kalba Municipality, Eng. Abdul Rahman Al-Naqbi, stated that his administration received during the past month a report stating that there is oil pollution in the seawater and the beach in the area between Khor Kalba and Al-Bhais area, resulting from violations of oil tankers in international waters that are washed away by marine currents in the regional waters, stressing that Pollution impeded fishermen from practicing the fishing.

The Fujairah Court finally decided to a fine two of the captain of ships of five thousand dirhams for causing pollution of the waters of the beaches of Kalba and Fujairah, while reserving both ships until the injured party in the state is compensated for the damages amounting to 14 million dirhams.

The details of the case are due to the flow of large quantities of diesel into the sea, following the collision of two commercial ships in the waters of the Emirate of Fujairah, which led to the pollution of the sea and the spread of pollution to the shores of Kalba and Fujairah, causing severe damage.

Therefore, the Middle East and North Africa maritime Development Programme calls for cooperation between the government and private sectors and international and regional organisations by strengthening technical support to impart greater protection to the marine and coastal environment, including issuing and implementing legislation and regulations to protect it from pollution, and organizing activities in The marine environment, and the establishment of marine protected areas to preserve and develop biological diversity.